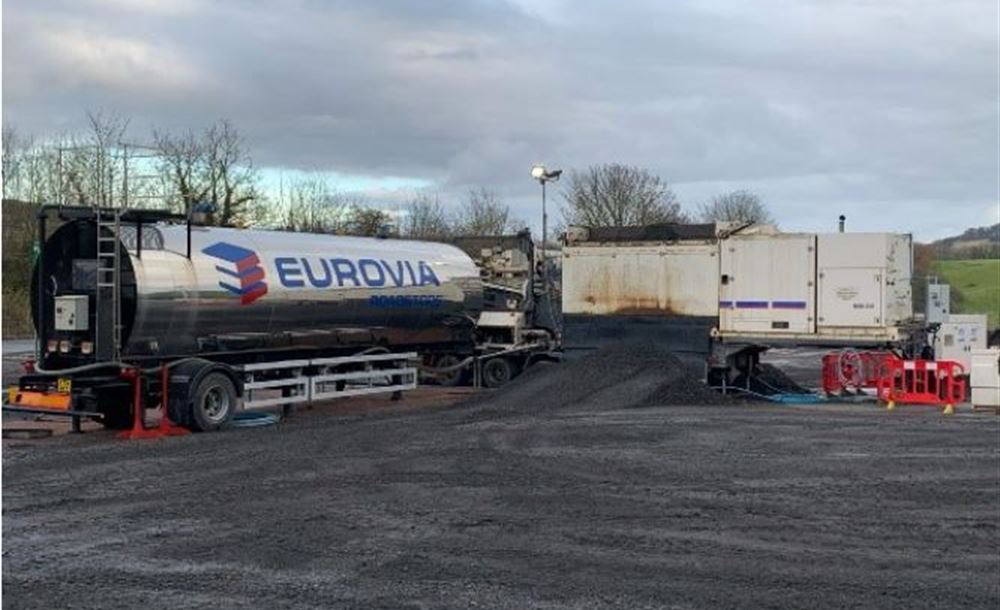 During November 2019, Eurovia Roadstone embarked on a major recycling programme of works in partnership with Breedon, JLUK and BEAR Scotland. The project involved replacing a section of the very busy A92 at Ladybank. It contained tar within the existing surface which is classified as hazardous waste, so special measures had to be undertaken.

The relevant section of the A92 was closed at 20:00 on Friday 8th November, the existing surface was planed out, loaded onto lorries and delivered for processing at Eurovia Roadstone’s RECOFOAM plant, which was set up at Breedon’s Clatchard Quarry, approximately 10 miles away from the Ladybank site. The programme was to complete three shifts of RECOFOAM production – Saturday day, Saturday night and Sunday morning – before installing the conventional asphalt binder course on Sunday evening. The road would then be reopened to traffic on Monday morning, before being closed again Monday evening for the surface course asphalt to be installed.

The AWCCT (Asphalt Waste Containing Col Tar) started arriving at the RECOFOAM plant at around 22:00 on the Friday evening – crushing and screening of the material commenced immediately and continued throughout the night. The plant started mixing the first load of RECOFOAM at around 09:30 on Saturday and continued until the required volume was achieved at around 02:00 on Sunday morning. Record-breaking volumes were delivered, with 2,200 tonnes of RECOFOAM being produced in just a 16-hour working window (28 hours including the crushing and screening process).

Chris Wingrove, Quality and Development Manager, Eurovia Roadstone said: “Eurovia Roadstone is delighted to have delivered this second ‘high profile’ scheme in Scotland with Breedon. We are particularly pleased that this was a BEAR project and look forward to working with them on future schemes.

“This environmentally friendly solution has saved over 2,000 tonnes of material classified as hazardous waste from being sent to landfill, which is a significant achievement. As well, we’ve delivered this project in two shifts instead of the planned three, enabling the whole works to be completed ahead of schedule. The feedback has been extremely positive.”

John Scott, Pavement Manager, BEAR Scotland said: “A well planned and executed job undertaken by Eurovia and Breedon, we asked a lot in terms of volume/time and you excelled. Hope to have you and your team up here again next year.”