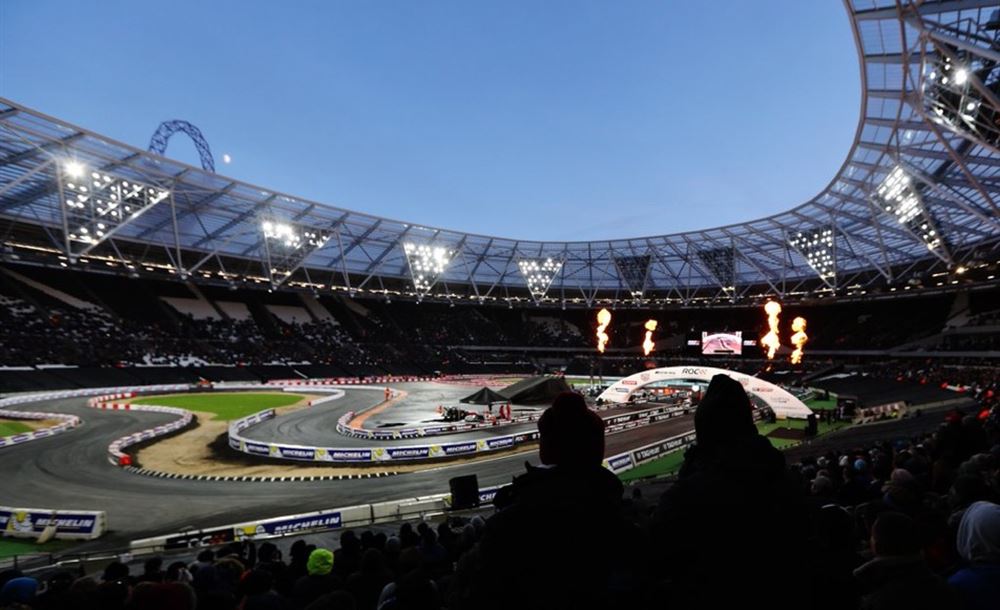 The Race of Champions (ROC) is an annual end-of-season contest which has been running for 27 years. It brings together some of the world’s greatest drivers from motor sport’s major dis- ciplines – including Formula 1, Le Mans, IndyCar, Rallycross and Touring Cars – and sets them free to battle head-to-head in identical cars.

Eurovia were invited to tender for the construction of the race track at the Queen Elizabeth Olympic Stadium following an initial enquiry from Michèle Mouton, track designer for Race of Champions (ROC). This followed Eurovia’s involvement at the event held at the Stade de France in 2008. Working in conjunction with the Race of Champions team, the track was designed by Jean Lefebvre (UK) and Eurovia were awarded the Contract with only 4 weeks to mobilise.

During the mobilisation period Eurovia’s project team frequently visited site, liaising directly with the Stadium oﬃcials and ROC, to discuss necessary arrangements for general access/ egress and other logistical requirements such as storage and welfare.

Prior to commencement of the works trials were carried out at Eurovia’s recycling depot in Bulls Lodge where Trackway was positioned & planings/asphalt laid on the tightest radius of the track. A selection of graded recycled road planings were laid by a number of alternative pavers, (conventional wheeled & tracked and midi tracked), to establish the most suitable material & preferred method of working. Trials to remove the pavement without damaging the Trackway were also carried out by cold milling, approx. 5mm above the plates & vacuum sweeping the remaining material.

The works required protection of the Stadium infrastructure, under soil heating on the pitch, foundations of the running track, underground services & chambers. This was achieved by us- ing aluminium plates, Trackway, directly onto the pitch, along with Terram2000 on the running track & steel plates on various chambers & slot drains. A full topographical survey was carried out to ensure surface water drainage on the completed track was adequate. Concrete barriers were placed on the perimeter of the track as a safety precaution to the spectators. The surfacing works were completed in 5 days and the finally the road markings and high pressure sweeping of the track were carried out before handing back to ROC.

Following the successful staging of the event, Eurovia’s team remobilised to remove the track and hand back to the Stadium to allow transition works to recommence, converting the stadi- um to the future West Ham United FC ground. The removal was substantially completed in 25 hours.

In all some 3,000 tonnes of recycled road planings and 2,000 tonnes of asphalt were supplied and laid, and subsequently removed, during the contract. All the recycled asphalt planings was supplied by Eurovia Roadstone and used initially as a sub-base and following removal of the track, all the subsequent asphalt planings were taken back to a recycling facility for re-use, either as a Type1 or 4 sub base or as RAP in new asphalt.